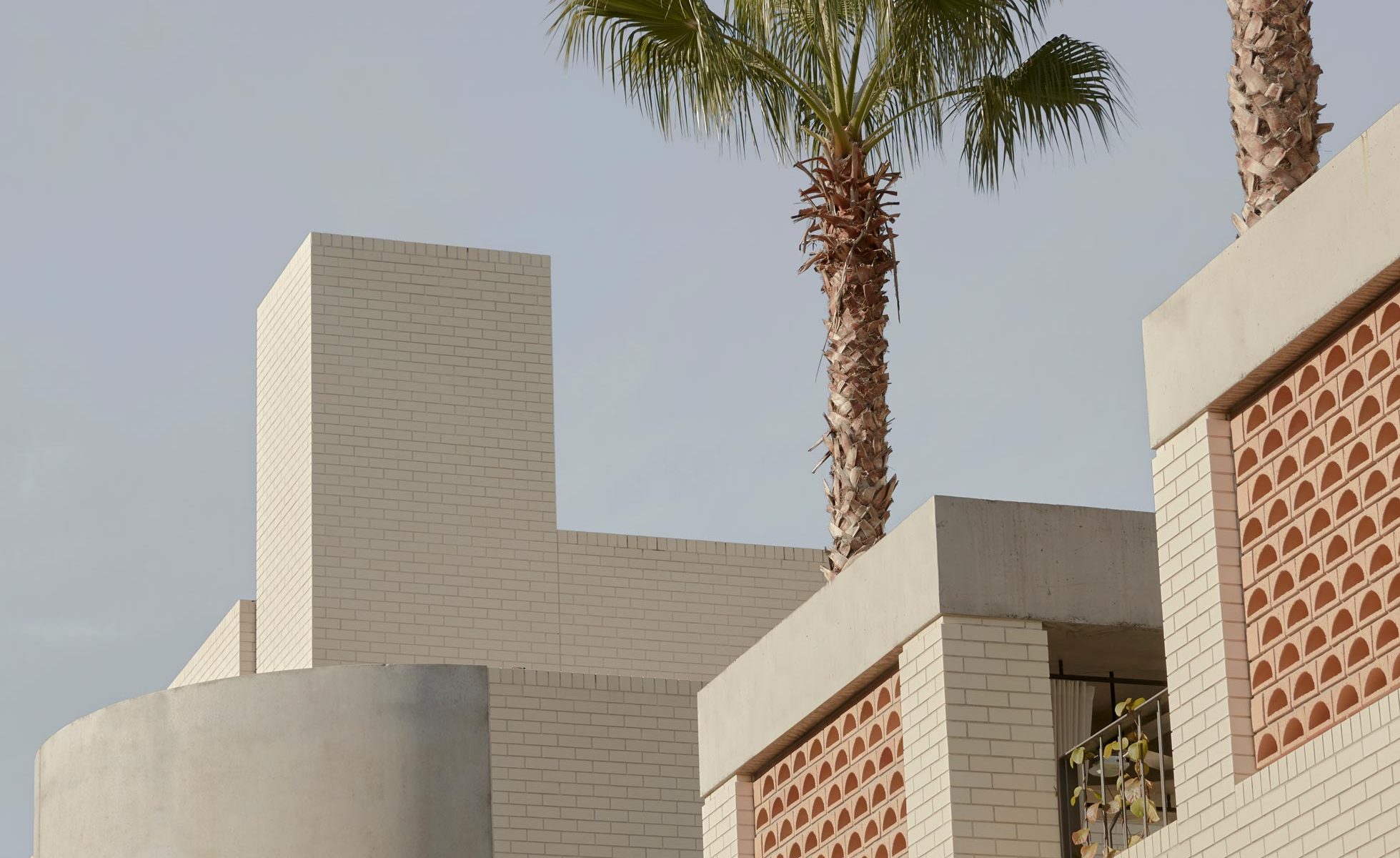 There aren’t many other hotels in Australia that elicit the same kind of breathless fervor as The Calile Hotel on James Street. Ever since opening three years ago, the Brisbane destination has fast become one of the most talked about hotels in the country. A feat of architecture and design by local architecture firm, Richards and Spence, which has set a new standard for Brisbane.

The hotel’s role in the wider James Street precinct has created not just a place for guests to stay, but an entire lifestyle destination where one can immerse themselves in cool bars, high-end dining and premier fashion boutiques.
The Calile houses local, interstate and international guests which injects a dynamic new population to the precinct. It’s an alternative to the generic international styling of business hotel chains and unlike anything Brisbane – if not Australia, has ever seen.

In the two years since opening, its centrally located pool, lobby bar and on-site Greek restaurant, Hellenika have won the hotel a legion of fans, . Of interest is the large number of locals who are choosing to staycation at the hotel.

The Calile has become a much-needed social heart for our New World City. 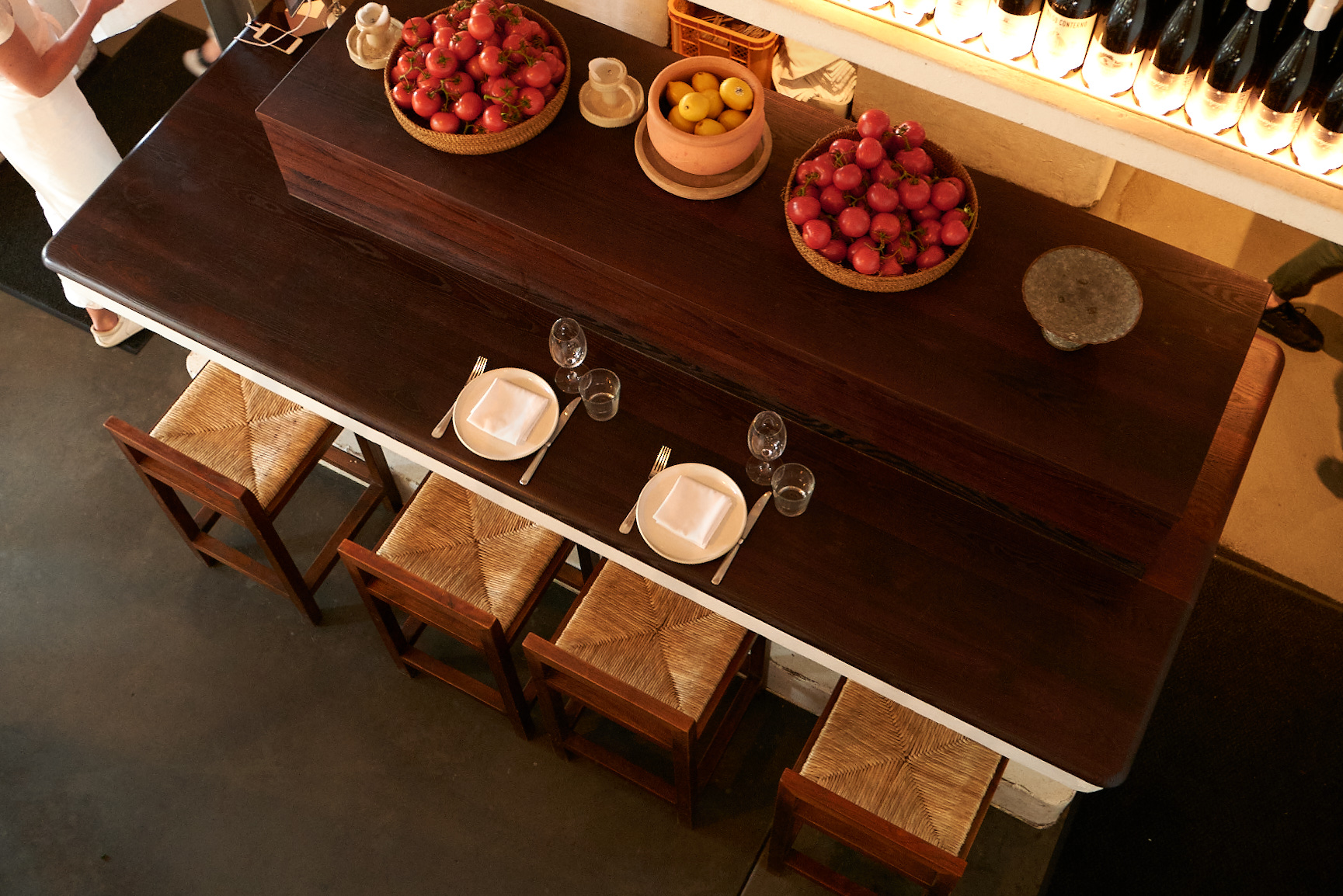 When it comes to marking a notable movement in the dining scene of Australian cities, Brisbane has found its rightful place in the top ranks, thanks to a wave of new entrepreneurs that have decided to re-write the rules to forge something that feels unique to the Queensland capital. The result is a finessed growth in quality and confidence in Brisbane delivering places and experiences that are ‘of’ now, and drawing a huge national crowd to the City.

Restaurateurs including Ty Simon and Frank Li (behind Agnes, Honto, Same Same, Bianca, and the newly-opened Agnes Bakery), have almost unwittingly created a newer, more easy-going culinary identity for Brisbane alongside a simple vernacular of white walls, bricks and ample shade and breeze. The trick, has been bypassing the pomp of older restaurants for a cheerier brand of service and a menu woven from the city’s mix of migrant cultures, many of which arrived here from the Mediterranean and Southeast Asia. 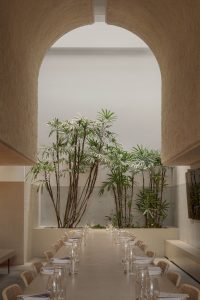 In the past, Brisbane took its culinary cues from elsewhere. Many restaurants opted for heavy European-inspired dishes, thickly carpeted dining rooms and starched white tablecloths. It was an odd approach for a city in the sub-tropics that boasts upwards of 280 days of sunshine a year and has great regional produce.

Having shaken off the shackles of an imported eating culture, over the last 2 years, Brisbane has seen a significant rise in its tourism economy led majorly by a new category of national tourism – Destination Diners. 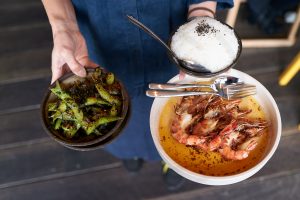 The James Street Precinct, in particular is a successful case study for Brisbane, as it led the way with attracting not only the Destination Diner, but also the permanent Migrator from Southern States, who otherwise would never have considered Brisbane as a Tourism destination, or a place to live. Southerners would tend to opt for a destination like Byron Bay or Noosa instead. 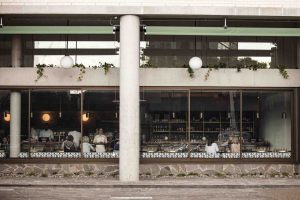 The Precinct brings to Brisbane much of the retail panache and diversity one finds in Australia’s more established blue-ribbon neighbourhoods, such as Double Bay in Sydney or Brighton, South Yarra and Toorak in Melbourne. The taste of James St therefore is very familiar to southern migrators, and they naturally gravitate towards the locale – being New Farm, Teneriffe, and Newstead.

Ty explains – “There are so many amazing people coming from Sydney and Melbourne and staying at The Calile [on James St], coming to our restaurants, dining at 9:30pm… We ask, what are you doing here and they say we are here for a holiday AND looking to move up here. The weather is fantastic and there is finally things to do.”

The decisive way hospitality operators like Ty have stuck to the one particular precinct, rather than multiple hubs throughout the city has contributed greatly to James St becoming a brand unto itself.

Traditionally, restaurateurs would look to franchise their ‘expansion’ and increase their footprint to multiple parts of a City as the ultimate goal. The modern restaurateur has zero interest in doing this. Instead, they localise – continuing to increase their empire within a single precinct.

This sort of localism has been seen not only with Ty and Frank – having 5 venues all within a stone’s throw of each other. But across a suit of new generation restaurateurs, such as Simon Gloftis, owner of Hellenika and SK (both in The Calile), and soon-to-open ‘Sunshine’. The Votan Brothers – responsible for Happy Boy, Snackman and Kid Curry; and Paolo Biscaro – the man behind the Teneriffe institution, Beccofino’s and newly announced Gigi’s in Newstead. 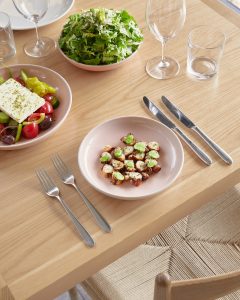 Having weathered the fads, the new Generation are banking on repeat customers, the loyalty of locals, and destination diners. And despite the economic uncertainty caused by the pandemic, the mood in Brisbane’s hospitality scene remains astonishingly upbeat. A confidence in the commercial curation of an area, and a strong local property market that is poised to withstand the growing demand from the Southern Migrators is the winning formula. 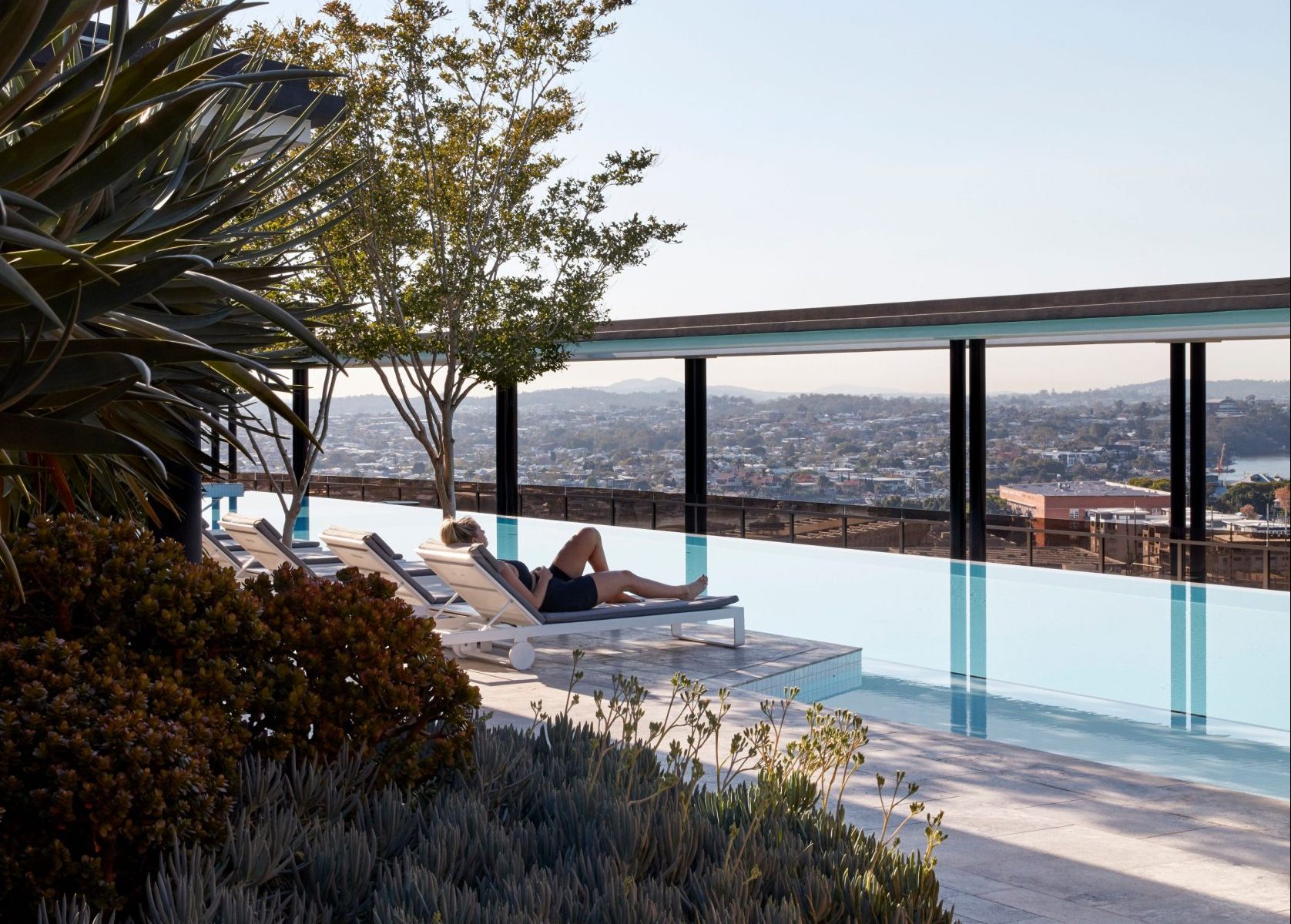 The world has changed. The unprecedented disruption to our lives caused by Covid-19, and the accompanying physical distancing restrictions introduced to stop it’s spread has changed many aspects of our lives that we previously would have considered to be unchangeable. One of the biggest, being the way we work and commute in this New Normal way of Life.

For many jobs there are no real impediments to working from home, and our recent experience has shone a light on the massive waste of time and productivity that results from so many of us having to travel to and from our workplace every day.

This is particularly the case if you were expected to travel in congested peak hour traffic.

We have had the technology to work from home for many years but for many reasons have been reluctant to try it. It has now been forced upon us and many companies and their employees are finding out that it is not such a bad thing after all.

This has been the opportunity for many companies to run a large-scale experiment on productivity of their people when the majority are working from home.

There have already been surveys released showing around 80% of people expect to increase the amount of time that they work from home or change travel times to avoid peak hour traffic when restrictions end. More interestingly, over 32% of Australians currently have the option of working from home. And most multi-national businesses offer this now as a permanent arrangement.

This has massive implications for the way we design and use our homes, our offices, and our transport systems. Our homes have become more than just places where we live—for many of us they are now our home offices, our education centres, our entertainment venues, our delivery procurement centres.

Developers like Cavcorp, who focus on the Newstead demographic to influence their floorplan design, have had major breakthroughs with their dedicated and purpose-built WFH spaces within their apartment design. Most recently seen in their multi-award winning development, LeBain.

To ensure the apartments were liveable and adaptable to future needs, LeBain apartments had been specifically designed to cater for this new Economy. 77% of the apartment on a typical floorplate are designed with ‘Work From Home’ dedicated spaces. Further to this, the resident’s amenities which include rooftop café style seating and sun lounges with High-Speed NBN internet, allow for additional breakout spaces for Residents to ‘Work From Home’.

We are also seeing a rise in demand for local amenities closer to where we live as people are restricted to their neighborhoods. Added to that we are seeing increased numbers of people walking and cycling—primarily for exercise but also for quick local errands.

It follows that areas which have walkable amenities—whether in denser inner-city areas like Newstead or in outer suburban areas—will experience greater demand.

For the development industry, we have already seen state governments starting to change subdivision design codes to reflect a demand for more walkable, healthy and active communities. The Queensland government’s model code alterations now include measures like compulsory footpaths and street trees, and requirements for a park or open space to be within 400 metres of every residence.

For all the tragedy around Covid-19, it has given us a unique opportunity to re-think how our cities, our suburbs, our transport networks and our homes work. 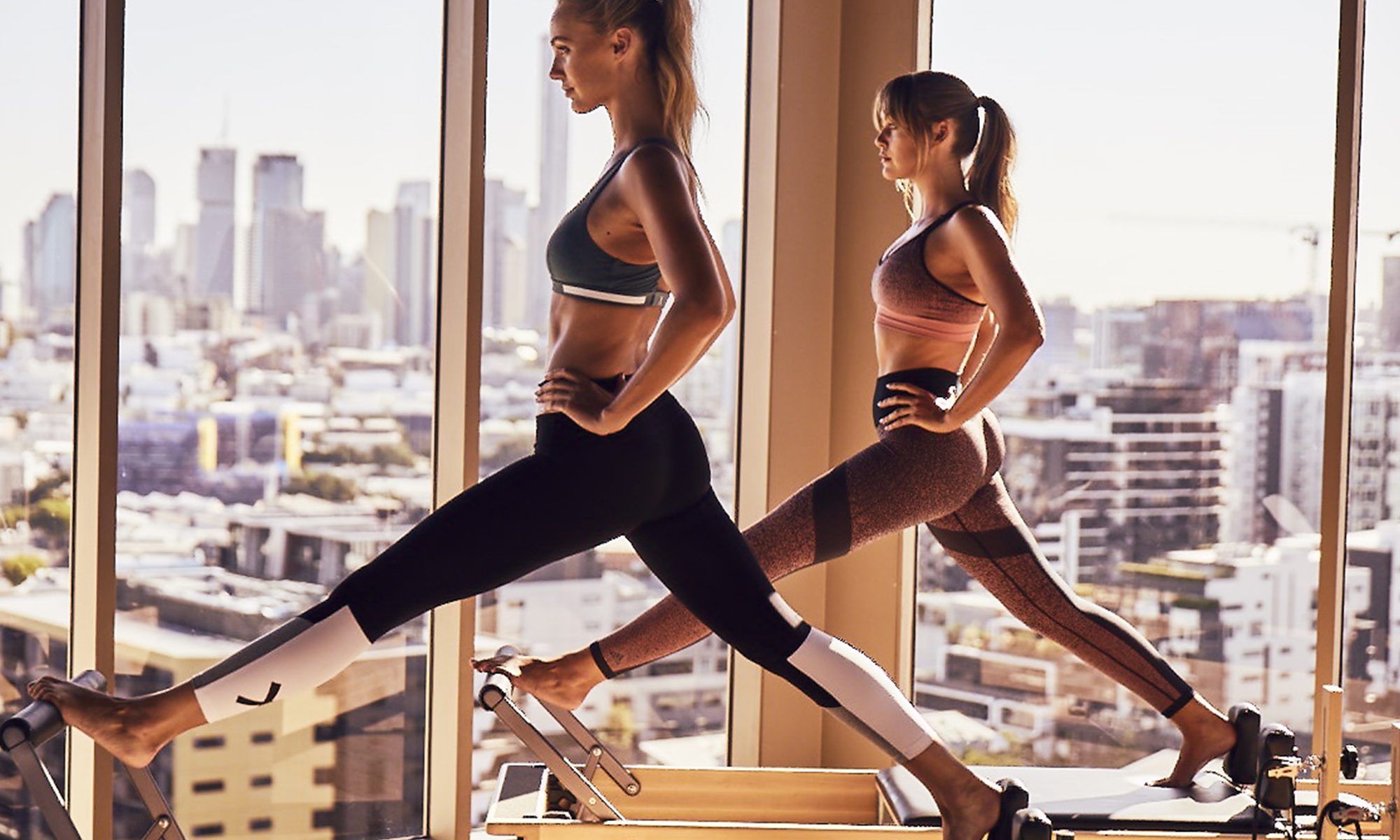 It’s the non-stop pace of our digital lives. An increasingly isolated and aging population. Rising chronic illness. Climate change. Given the pressures of the modern world, a gym membership and taking the occasional “mental health day” often just aren’t enough to maintain a healthy lifestyle.

As society’s awareness of the environment’s impact on health increases, Australians are becoming more conscious of where their money is being invested; choosing workplaces based on flexibility and work-life balance; and now, how and where they live. Residential Real Estate is the next frontier that is being completely transformed by the Wellness movement.

According to Global Wellness Institute, the Global Wellness Real Estate market will be worth more than $262 Billion by next year, and it’s a trend that is gathering momentum in Australia, too, ranking third in the world’s wellness real estate market.

Wellness Real Estate is defined as “homes that are proactively designed and built to support the holistic health of their residents”. These are buildings that go on to foster ‘wellness communities’.

While it can have many aspects that promote health and wellbeing, wellness real estate can include good air quality, good lighting, and access to community, access to green spaces, energy efficiency, and close proximity to public transport. And residences that do tick these boxes are wetting the appetite for affluent buyers to pay a premium.

According to the recently-released Coldwell Banker Global Luxury® Report for 2020, buyers are likely to pay more for a home which incorporates healthy, eco-friendly amenities. 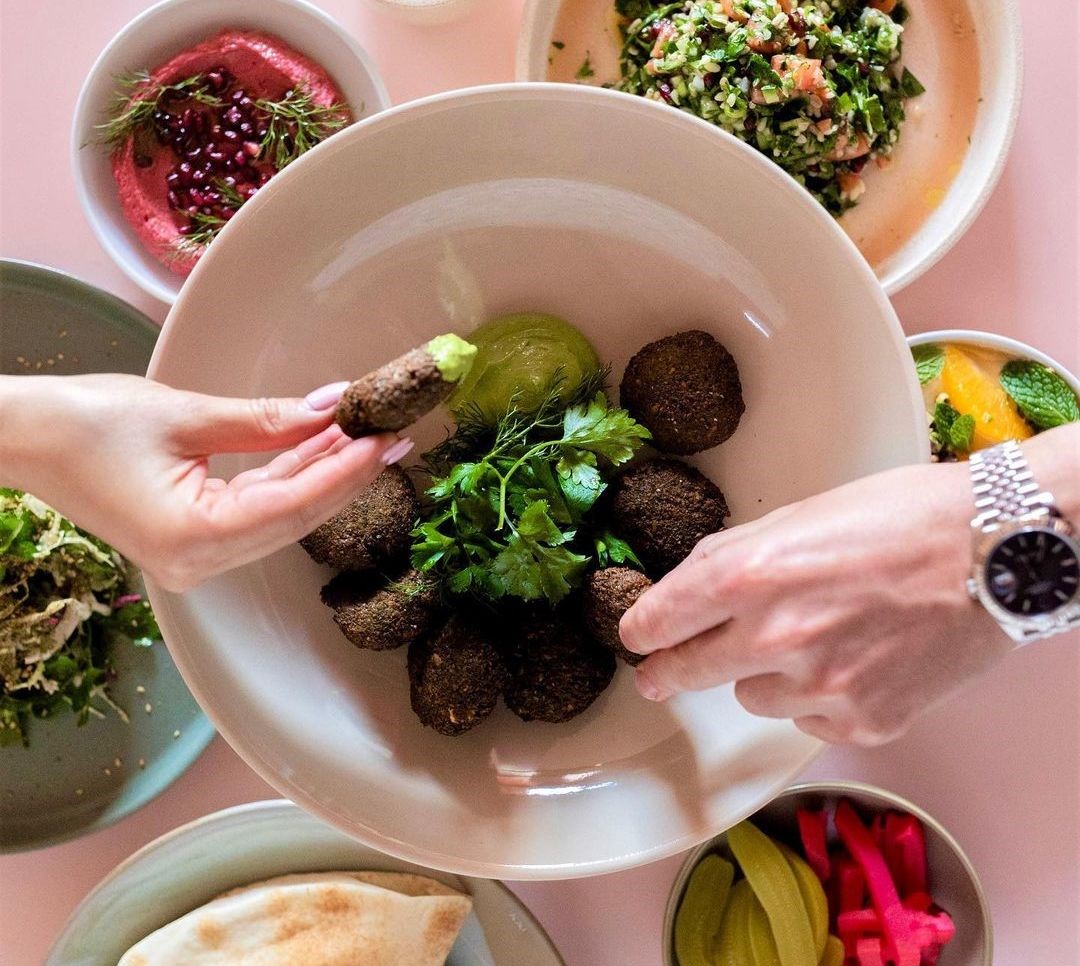 A one-stop urban oasis boasting greenery and homewares as well as a stellar Middle Eastern-inspired food and drink offering. The Green is the name of Angela Sclavos and Christina Habchi’s new multifaceted concept, which opened this week in the heart of James Street’s retail precinct near St Barts.

The space (formerly home to REDSEA Gallery) was selected for its location – close to James Street’s buzzing nexus but removed enough for it to offer a sense of quiet tranquility beyond the glam. Working with internationally acclaimed designer Borhan Ghofrani, Craig Channon from Channon Architects and construction specialists Lowry Group, Angela and Christina are establishing an interior visual identity that favours contrasts and juxtapositions – think brutalist design, concrete elements and a sense of raw materiality offset by an abundance of foliage, as well as warm red hues inspired by the cedar trees of Lebanon as a nod to Angela and Christina’s Lebanese heritage.

Central to The Green’s operational framework is Angela and Christina’s desire to celebrate the culinary culture of Lebanon, offering an approachable take on the cuisine that showcases the love and generosity synonymous with Middle Eastern cooking, with some artistic flair. When it comes to food, The Green will not only be home to a 70-seater interior dining space, but also a deli section offering home-style food to take home and enjoy.

The Green is located at 27 James St, and open for Breakfast and Lunch.